Accept The Offer Made By The Russians[edit | edit source]

There are some things money can't buy. My loyalty is not one of them.

It's called the rat race for a reason. I'm coming out on top.

Escape The Hitmen After Being Discovered[edit | edit source]

It's time to lay low.

Fake Your Own Death[edit | edit source]

Where there's smoke, there's explosions. Time to disappear. For good.

The world's full of surprises waiting to be unwrapped.

Eliminate your Gang With The Russians[edit | edit source]

Comrades in arms, we're taking them down.

There are some things money can't buy. But I'll take what I can

There's always someone sniffing around, trying to steal your stash. 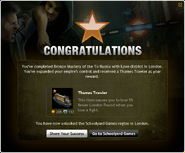 Add a photo to this gallery
Retrieved from "https://mafiawars.fandom.com/wiki/To_Russia_With_Love?oldid=271144"
Community content is available under CC-BY-SA unless otherwise noted.