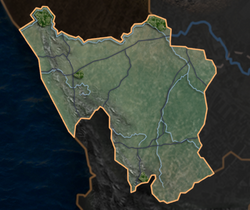 Energy requirements and Experience/Currency payouts in Springbok vary depending on player level. See main article on the South Africa page for detailed information on how this works. The values on this page represent those of the 5000-6999 level bracket.

I've had him in my sights for a long time. And it's finally here - the beginning of his end.

Call For A Meeting In A Secluded Location[edit | edit source]

He thinks he can take control of the situation? He was never in control. And he never even knew it.

They say keep your enemies closer. A VIP badge helps me do just that.

The one thing I didn't plan or expect. But life is full of pleasant surprises.

He doesn't realize he was safer with the mob that was trying to tear him apart.

I almost pity the guy, but I have to break it to him. I was never on his side.

He will be made to remember. The horror I could never forget.

Does he truly regret the past? Unlikely. He only regrets that it didn't stay buried.

With the most recognizable face in the country, did he really think he could hide?

Out of sight and out of mind. For now. My time in the spotlight will come soon enough.

Retrieved from "https://mafiawars.fandom.com/wiki/Springbok?oldid=289410"
Community content is available under CC-BY-SA unless otherwise noted.