This timed Secret District in Brazil contains 9 new jobs that 75+ level players will need to complete before 4pm (Zynga time) on August 30, 2011. To get a head start on completing Smuggler's Haven, you could unlock it early by finishing Mission Event: Get A Grip! It was automatically unlocked on Tuesday, August 16, 2011. 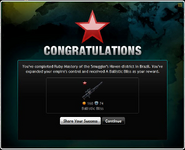 Add a photo to this gallery
Retrieved from "https://mafiawars.fandom.com/wiki/Smuggler%27s_Haven?oldid=255298"
Community content is available under CC-BY-SA unless otherwise noted.