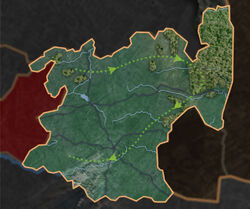 Energy requirements and Experience/Currency payouts in Nelspruit vary depending on player level. See main article on the South Africa page for detailed information on how this works. The values on this page represent those of the 5000-6999 level bracket.

Launch An Assault On The Football Stadium[edit | edit source]

They're descending like birds of prey. I see guns. But how can I run from what might be the story of the decade?

Demand That The President Be Surrendered[edit | edit source]

They want the great man himself. My cameras had better be getting every second of this.

Give The President Time To Escape[edit | edit source]

What are they waiting for? They'll lose their quarry if they don't storm his box now.

He's gone. And abandoned his people to their mercy. O! the people, the children. Run, run!

It burns. Deep in my brain as I inhale. Can't think, can't breathe. I feel only a hand on my arm. Like a vice.

Panic rising like bile in my throat. I will fight it. And I will survive this. Like I have everything else in my life.

Persuade The Mogul To Join Your Cause[edit | edit source]

The glass ceiling lies shattered at my feet. And they offer me a chance to rise even higher. I will use them as surely as they will use me.

Good morning, Mr. President. How would you like your news today? One lump or two?

Can you feel the rumble? It'll soon be a roar. I own the people. Do I dare dream to own the Parliament soon?

Retrieved from "https://mafiawars.fandom.com/wiki/Nelspruit?oldid=288633"
Community content is available under CC-BY-SA unless otherwise noted.