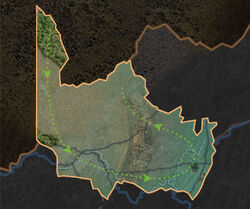 Energy requirements and Experience/Currency payouts in Kimberley vary depending on player level. See main article on the South Africa page for detailed information on how this works. The values on this page represent those of the 2500-4999 level bracket.

These days, I need eyes in the back of my head so I can watch my back. Who knew I had followers?

Discover The Secret Location Of The Herbs[edit | edit source]

I discovered another kind of diamond-a secret kind that only I can cultivate, using methods passed down through the generations.

I don't like that he's been following me, but it's in my nature to heal the wounded. I hope I don't regret this later.

Offer A Contract To The Witch Doctor[edit | edit source]

My herbs are worth more than his paper. They are my life's cause, my legacy!

He's offered me the moon, but I prefer to live under the stars. He cannot intimidate me.

Gather A Mob To Force Doctor To Agree[edit | edit source]

I chased the devil out only for him to return with a legion. Who are they and why do they want my secrets so badly?

Set Doctor's House On Fire As A Warning[edit | edit source]

They've burned everything! If they want to kill me too, I'll die taking all my secrets with me.

Discover That The Doctor Has Escaped[edit | edit source]

The secret's in my head, but they're rummaging through the gutted remains. I'm going to have to make a run for it.

They're coming fast, but a man's got to try. I'll have to run to my closest hideout, if they haven't found it already, that is.

It seems I've run out of the frying pan and into the fire. I've come undone!

Retrieved from "https://mafiawars.fandom.com/wiki/Kimberley?oldid=287919"
Community content is available under CC-BY-SA unless otherwise noted.