Italy is the eighth playable city in Mafia Wars.

Building Parts are common to all properties

Special loot items dropped from a job in the corresponding Region

All loot items drop randomly in their respective regions. For a more specific page detailing where these loot items are from, see Loot:Italy

* 89 Cooked Books will master the required Job fully in Region 5. You will need additional Cooked Books to loot the Set of Hidden Charges needed in Regions 5, 6, 7 and 8. Fewer needed if you do not complete all paths.

** Fewer Smart Phones and Set of Hidden Charges will be needed if you do not complete all Paths.

When you get Bronze Mastery on a District you receive the mastery item listed below. When you get Silver, Gold and Ruby Mastery this item gains more attack and defense and replaces the previously earned item.

Italy City Missions are given by Vince Giorgio.

There are a total of 38 city missions for Italy, including 4 of each mastery mission (Bronze, Silver, Gold, Ruby).

Completing the mastery missions is not required, does not restrict the way you progress, and will not prevent you from obtaining the Mastery Rewards. 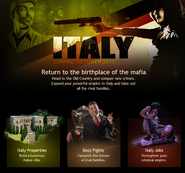 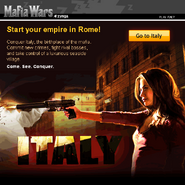 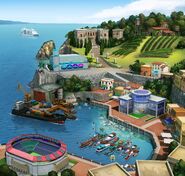 You took everything they called their own. They're back with a vengeance and some new allies - the Neo-Imperium. All of Italy is up in arms, and you're their target. Beat them at their own game and walk away with your head held high before Italy is locked down. 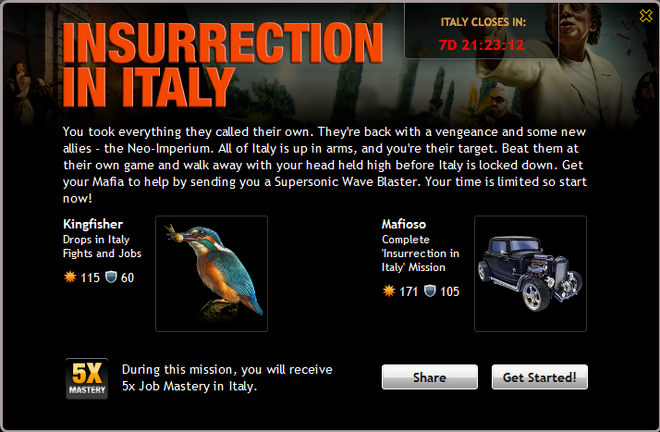 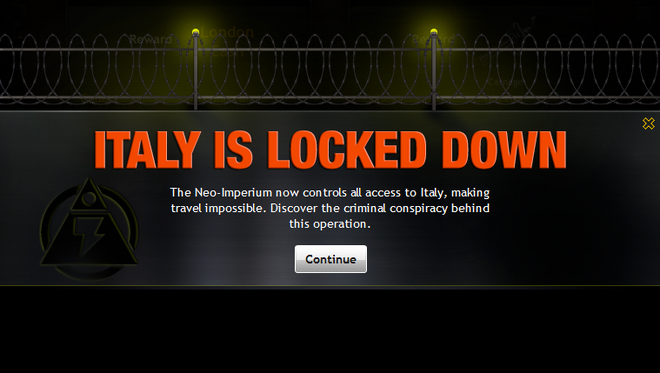 Retrieved from "https://mafiawars.fandom.com/wiki/Italy?oldid=292897"
Community content is available under CC-BY-SA unless otherwise noted.