Force An Immigrant Family From Their Home[edit | edit source]

Rather be a have than a have not: that's what Leon said. So we turned against our people.

Meet The Land Mafia To Collect Your Take[edit | edit source]

You know how the rich stay rich? They take what's rightfully ours. And keep it.

Fifteen seconds of fame. And boy, did we shine!

We knew nothing about art, except that it doesn't come cheap.

And then there were the finishing touches to that painting.

They were playing with fire, waiting to be burnt. Who were we to deny them?

Collect Your Take From The Construction Firms[edit | edit source]

They came round, and saw eye to eye with us on the meaning of business.

No-one takes kindly to betrayal, but karma seeks revenge. I'm the one that got away.

There's no room to be lost in translation. This will spell it out, loud and clear.

Organize A Protest Against The Construction Firms[edit | edit source] 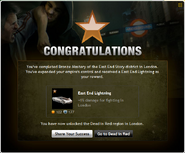 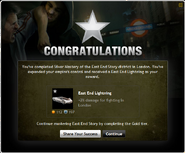 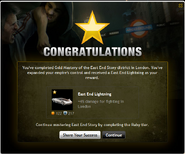 Add a photo to this gallery
Retrieved from "https://mafiawars.fandom.com/wiki/East_End_Story?oldid=271138"
Community content is available under CC-BY-SA unless otherwise noted.