A woman shot dead in an exclusive nightclub - this could make my career.

Work With The PI At The Crime Scene[edit | edit source]

It's easy to manipulate a heartbroken ex-husband. Luckily for me, he's also a private eye.

London's Finest ... when it comes to being corrupt. The investigation has been closed!

Search For A Trail[edit | edit source]

Royal, he is. Prince Charming, he isn't. A killer? Maybe.

He knows we're onto him, and beneath that cool exterior, he's panicking.

Lay A Trap For The Royal[edit | edit source]

He's all brawn, no brain. Little does he know that he's confessing on candid camera!

The killer's unmasked, and by his own hand. The same hand that runs our newspaper.

Bite the hand that feeds and it could break you. For good.

Girls, girls, girls! And snow, if the weather is right.

This is a game of cat and mouse in the fast lane. 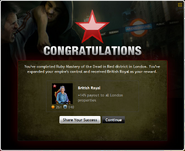 Add a photo to this gallery
Retrieved from "https://mafiawars.fandom.com/wiki/Dead_In_Red?oldid=271139"
Community content is available under CC-BY-SA unless otherwise noted.