Note: Due to overwhelming demand Zynga decided to leave Bangkok open for the time being, but this is only temporary and the Neo-Imperium will surely close down the airport in the future.

As an extra during this event, the Snake Fang (

122) also drops from Jobs and Fights (with a limit of 10/day). There is also a 5x Job Mastery bonus if you have not completed Bangkok yet.

All missions unlock in the order displayed unless otherwise indicated.

"So the Neo-Imperium has finally come to our corner of the world. They've taken my power from me. I am in exile. Help me take back what I lost, and I will follow you." - Shadow King

"Good work. You have a long road ahead though." - Shadow King

"First, we need to establish a base in Bangkok. It is important our presence goes unnoticed for now." - Shadow King

"Good work. Now that we have a base of operations, the real work begins. Track down Suchart and get his help." - Shadow King

"The Shadow King sent you? Well then, I'll do as you say. But only if you help me free my brother from a high-security prison." - Suchart

"He's free! You have my thanks. Take these rewards, and I will tell you how to strike at the Triad first." - Suchart

"You think you can hurt us? The Triad works for the Neo-Imperium now. Together we are unstoppable." - Chang

"I know when I'm beat. Go ahead, finish what you started. And make it quick." - Chang

"You want to deal Triad secrets? I can speak for the Yakuza. What is your offer?" - Toshiki

"Your trap worked! Now that we have hostages, we can negotiate with the Neo-Imperium." - Suchart

"You're a fool if you thought I would follow you. Now that you've handled the Neo-Imperium in Bangkok, I think I will take over from here." - Shadow King

"You are stronger then you look, but you haven't seen the last of me!" - Shadow King 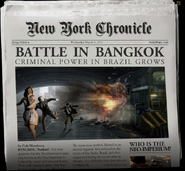 Add a photo to this gallery
Retrieved from "https://mafiawars.fandom.com/wiki/Battle_In_Bangkok?oldid=256226"
Community content is available under CC-BY-SA unless otherwise noted.