For decades, the Japanese Yakuza and Chinese Triads have battled for control over the lucrative criminal markets of Thailand. You can choose who you wish to ally with as you progress through Bangkok's gritty underworld, unlocking progressively stronger weaponry with your chosen faction but gaining increasing hatred from the opposition.

As you complete certain jobs and win fights against rival faction members in Bangkok, you'll earn increased respect from the faction you help out. Earn enough reputation, and you'll unlock special items that can be purchased in the Faction Store.

However, helping one faction is sure to anger the other - keep in mind that as your status with one faction goes up, the other faction will drop. Drop below a certain level and that faction may cut off access to items in the store.

Each time you do a crosspoints job, you will get +3 respect for the faction you are choosing and -1 for the opposing faction. It is possible however to nearly master the choice for both factions and then finalize your choice, which will result in a bigger overall respect increase, lower specific increase and no decrease in respect. You can also gain an increase by 50 for 10 Reward Points.

Bangkok BETA was originally released with 2 available episodes, the second unlockable by completing the first and 4 visible 'Coming Soon' episodes. It was extended on February 5, 2010 to reveal the remaining episodes.

Each Episode has four tiers of mastery. The fourth is Diamond Mastery.

Each property can be purchased once and can be upgraded upto Level 30. Businesses are summarized with (Name, Produce Baht on Level 30, Time to collect) as

Bangkok businesses (on level 30) make less money than you require, almost 8.5% in 30 days for your requirement to purchase inventory of fourth level mastery in assassin tier.

Businesses in Bangkok make less money than the other cities.

Thought you’d finished with Bangkok? Think again. Return to the Far East for two all-new episodes for Bangkok, where you’ll need to fight to re-establish your hold as a major Yakuza and Triad boss. Extend your influence and consolidate your power base. It’s only a matter of time until you will be the greatest criminal in Asia, and you’ll need to overthrow the Thai government to protect your criminal empire. These episodes will only unlock after you have completed episodes 5a and 5b.

Watch out though - power has a way of bringing some unwanted attention from some shadowy forces… With completely new jobs and Mastery items, there are new challenges and prizes that await. Are you ready to conquer the mysteries of Thailand? 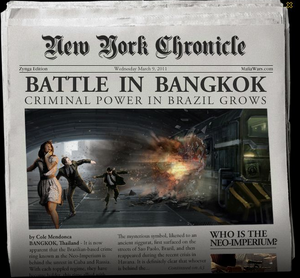 The Shadow King, formerly the biggest crime boss in Asia, has deposed and been forcefully deported from his native Thailand. He seeks your help in regaining his empire in Thailand, and presents the strongest ally in your fight against the overwhelming force and power of the Imperium. Old enemies have emerged and allied with the Imperium, and you'll have to defeat them if the tide is to be turned.

The Battle in Bangkok will only last a limited time and the future state of Bangkok still remains unknown. Business operations in Bangkok may come to an end. As of this moment….nobody knows! Continue to check back for the latest news.

Every player will need to loot the Snake Fang Knife (61/61, Rare Weapon) to complete mission progress. This item will only drop in jobs and fights (but not robs) in Bangkok. Completing all missions and their related tasks will award you with the Special Mastery Item, a Coiled Strike (80/140 Superior Vehicle).

During this time of havoc, 5x Mastery will be granted on unmastered jobs. Once a job is fully mastered one skill point will be awarded. Mastery Items will also be granted for mastering each episode. 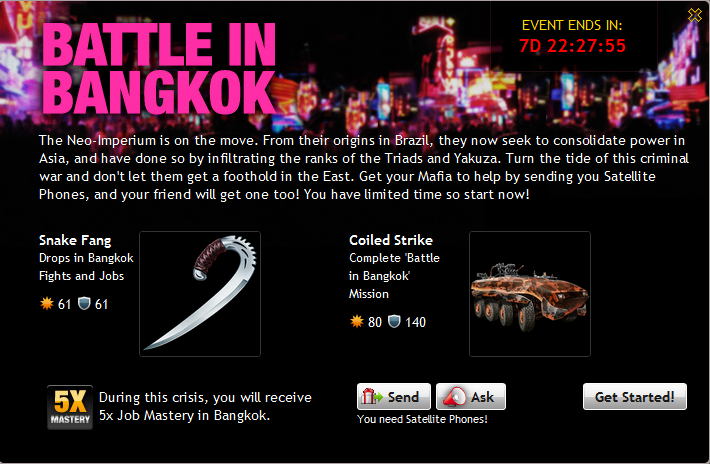 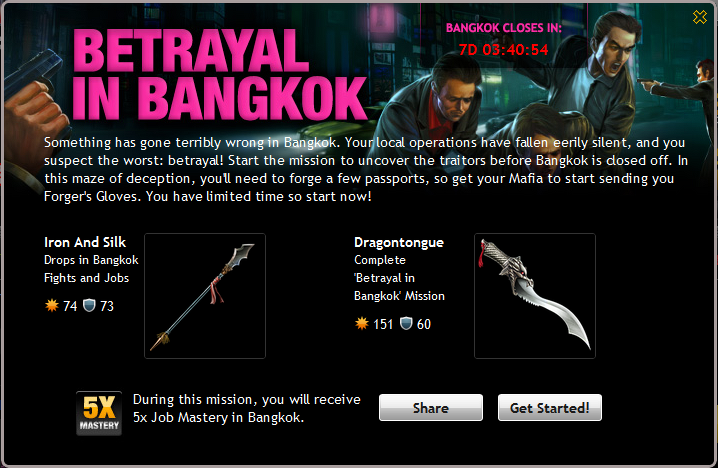 Retrieved from "https://mafiawars.fandom.com/wiki/Bangkok?oldid=264924"
Community content is available under CC-BY-SA unless otherwise noted.